The musical band from Netherlands who believes music has no language, recently released “Invest In You” – announced the ‘Winner – Best Of Asia’ at the Intercontinental awards 2020. ‘Invest In You‘ was also the 2020’s First Raga of the Week broadcasted by BBC & Honored by GLOBAL MUSIC Awards:

Invest in you – Propagates the message that we have to search within, to identify with ourselves and make time to recover from the morose mundane and purposeless life that we are livingand gravitate towards a healthier, fulfilling and satisfying life.

Mithun Hariharan – Co-founder of Madras Chorus lead the arrangements and compositions for most of their releases. Mithun is a late bloomer, his passion for music was manifested at the age of 31. His previous work – “The Awakening” was already recognized at Global Music Awards:

The band has also released “Mayhem in 60 Seconds” with budding talents from the Netherlands, crossed over 100K views:

Music Has No Language Barrier

The musical band from Netherlands who believes music has no language, recently released “Invest In You” – announced the ‘Winner – Best Of Asia’ at the Intercontinental awards 2020. ‘Invest In You‘ was also the 2020’s First Raga of the Week broadcasted by BBC & Honored by GLOBAL MUSIC Awards. Since being formed in 2017, they have become one of the most recognized bands in the world. The pan Indian band continue to produce hit after hit and break barriers with their music. When listening to their music, you close your eyes and for a few minutes you are transformed to another world, a world where there is no war, no COVID19, and no worries, a world which can only be described as heaven. We decided to sit down with Madras Chorus and learn what makes this band so special, and why they have transformed the music world forever.

Madras Chorus had its official launch in January  2017 .

The idea to officially form a band was decided by a group of local music enthusiasts . We have been performing as a group at various forums for different gatherings across India and hence came up with the idea to form a band which is PAN Indian and not defining a particular community or state or country. And together to organize shows which caters to everyone . The  Management team consists of Myself(Mithun Hariharan), Ravish Pattabi & Priya Ravish. Local artists like Harikrishnan Kesavan (Singer), Sreekanth Madhavan (Percussion) , Arun Veerakumar (Singer), Supriya Sreeram (Singer), Sarath Sasidharan (Drummer), Sangeetha Jayaram ( Singer)  were the first ones with whom we thought to  form the band and later there were many who joined.

Yes , it has had a great influence in helping us bring the world together under one musical roof . We customized our compositions based on western music style ; at the same entertaining and making the Europeans aware of the rich Indian musical heritage both classical and bollywood styles. Clearly this has helped us in embracing the world music, combining them with our traditional Indian and bollywood styles.

Excited, totally out of the world feel it is!It gives us the confidence to contribute more passionately to the musical world with a belief that perseverance , patience and hardwork always pays off. Believe in yourself and sky will be the limit .

Team Madras Chorus’ mantra is ‘Music has no language’ and we believe it’s the only language which can connect people and unite the world. Our shows have music of all genres , styles and languages and we have our audience spread across nationality . Our audience seem to just enjoy and most importantly enjoy the music together laughing and dancing all through .The word ‘ Madras’ is just an emotion to connect people across the globe musically .

I assume  it had to happen at 31 only ,perhaps !Well, the first step was supposedly to identify that musical talent in me. This could have been spotted  by someone else early in my life or it had to be me ,at the right opportunity .In my case, this didn’t happen in the earlier stages because of different priorities and challenges. Though I did mixing and arranging of tracks for local events and their videos , this specific part of that inherent passion for music in me went unnoticed.Thanks to Madras Chorus for helping me rediscover and better myself with each passing day .

Teamwork !We are not professional musicians but we are extremely passionate about music and start with a clear end in our mind for all our productions . We are musicians at night! I have to thank each and everyone – the Madras Chorus team ,my Guru, various musicians who have executed their part so well, our media team and most importantly my family who has always been there to encourage and inspire me to get better !

The secret is – this is not a one man show. Without the team and each one executing their part we would remain unnoticed. Though none of us are fulltime music professional’s, we start with a clear end in our mind for all our productions. Musicians’, Media team, support from family, bringing them all together is the key to our success.

Thank you! Happy to hear once again , that my music creates such an impact on your mind.

The composing part was easy! A beautiful sunny  autumn morning walk inspired me, which is when I got that spark to compose something as beautiful , as fresh , as calm as that autumn morning . I went back home and was easily able to play on my keyboard this track in one go however the next phase (production) was a difficult one ! For someone who had discovered his intense passion for music just a few years ago and started learning it very late in his life , it was hard to convince everyone about the beauty of my first composition. We  recorded the first rough draft, had to shoot the visual’s within 45 minutes as apparently  that very morning happened to  be the last sunrise of Autumn for the year.In that limited early morning hours , we had to do several things in parallel. Aswathy Arun with  choreography,  Arun working on various locations to shoot the visuals , and finally me with the heavy work of editing, and it all together took several weeks to finally get to the final result that we see now! A beautiful musical composition with the visuals aptly suiting the track is indeed very challenging . And then keeping the confidence in my abilities ,believing the fact that it is never too late to bloom and self motivating myself fighting against various challenges and obstacles as indeed another big challenge. 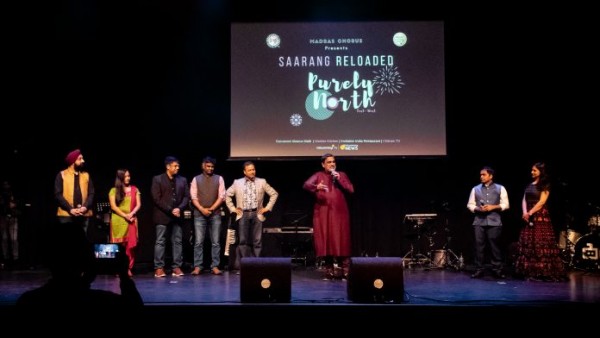 (H.E Venu Rajamony – Ambassador of India to the Kingdom of the Netherlands, Appreciating Madras Chorus)

We launched the Album “Spirit of Life” on 7th Dec 2019, and “Invest in you” was the first track to be released. We have been extremely fortunate that this beautiful track got noticed and was aired as the first raaga of the year 2020. It is always a joy when your hardwork gets appreciated.

Music is one language which can bring people together . In the difficult times we have been facing now , we have been  able to bring different people together in the Netherlands virtually in a recreated  magical track -’ Mile Sur Mera Tumhara’ , sending in a message of ‘Unity In Diversity’ . Only music can unite & heal the world and make it a better place to live in.

Royal Albert Hall – the world’s leading artists from many performance genres have appeared on its stage. Would like to follow the footsteps of the legends. From a local venue perspective – Duycker in Hoofddorp has been outstanding, that’s where we created the magic.

We would love to perform across the world , especially in the UK spreading lots of love, happiness and positivity. Once this pandemic comes to an end , we will be there to make people dance and sing together with us .Looking forward to being there soon in our  musical mission to unite the world.

Listening to the director,hearing various other compositions which have been liked by the listeners  and executing the inputs parallely in a smart way is the key ! To cater to the likes and tastes of the listeners is very important as they are the ones who decide or give their verdict . Though we follow some of the mandatory items in a sequential way, the overall production runs in parallel. It is very important to have a good team synchronization in the way we think and execute the entire musical cycle.